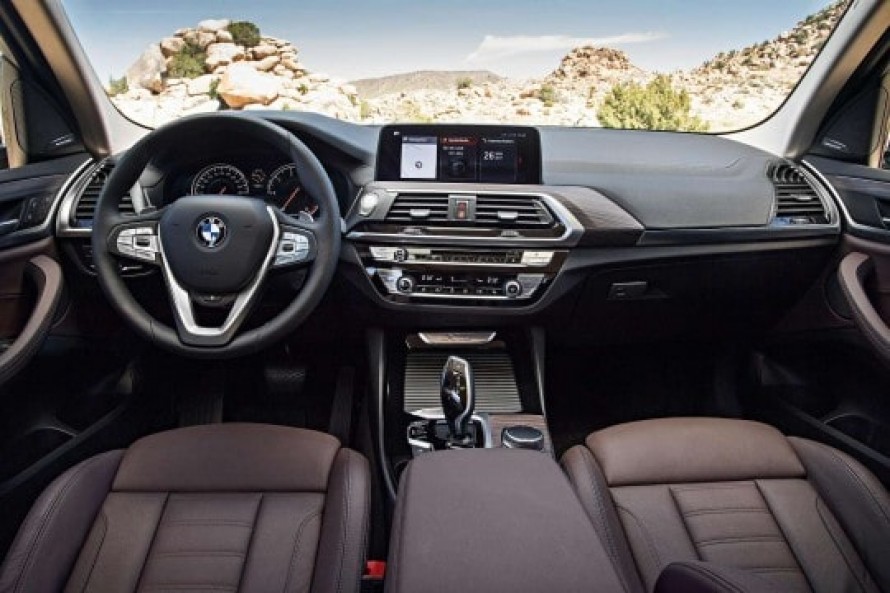 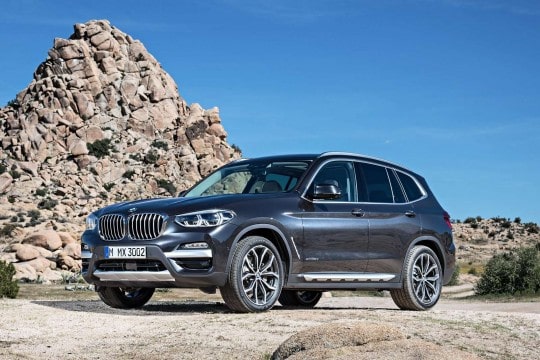 Our latest new Fleet arrival is the BMW X3 SUV xDrive20d M Sport Auto, this X3 has come of age in third generation guise. If it struggles to match the profitability of its predecessor, then that'll be because competition in the premium mid-sized SUV sector is so much tougher these days. This model is, after all, an immeasurable improvement over the MK2 version in every possible way.

Even the best of this car's prestige rivals can't match this one's hugely impressive blend of handling and efficiency. It feels up-market, it rides impressively and, thank goodness, on-tarmac, it drives just as a BMW should. All of which means that buyers in this sector who can afford the asking price should find that this X3 adds up very nicely indeed.

A vehicle this good ought to speak for itself. Try one and we think you'll find that it does. 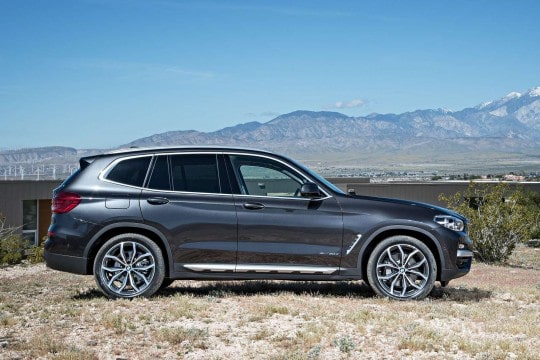 It isn't often that BMW gets it wrong - and even when it does, it usually still manages to turn a profit. Their original X3 compact SUV was a case in point, launched in 2004 to more affordably extend the reach of this Bavarian brand's road-biased SUV model range following the success of the larger all-conquering X5. But early X3s felt cheap, rode poorly and, even by the modest tarmac-orientated standards of the class, were woefully short of any kind of off-road ability.

The second generation version, launched in 2010, was much better, but - in this country at least - it still lagged behind its arch-rival Audi's Q5, in terms of perceived desirability. Much has changed since 2010 of course. BMW launched a second generation X1 model in late 2015 that trod uncomfortably on the toes of lower X3 derivatives. And the X3's task was made even harder by the launch in 2016 of a Mercedes entrant (the GLC) in the mid-sized premium-badged SUV segment and the introduction of a second generation Audi Q5 model in early 2017, to join other key rivals like Volvo's XC60, Jaguar's F-PACE, Alfa Romeo's Stelvio and the Lexus NX. It all means that the X3 needs to re-assert itself.

Can this third generation model do just that? 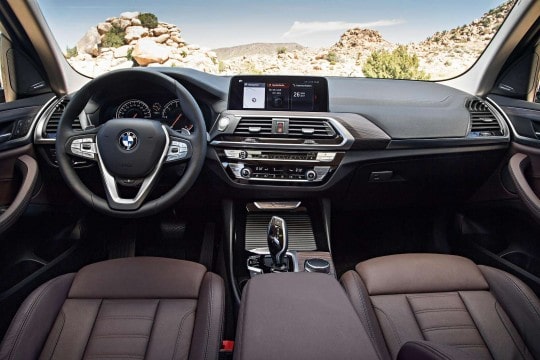 You might think that sandwiched between the X1 and the X5, the X3 wouldn't have to spread its talents too broadly, but such is the span of rivals of this size that this third generation X3 needs to cater for quite different customer expectations in the compact luxury SUV segment. If those expectations extend towards a dynamic driving experience, then the X3 comes well prepared. With ideal 50:50 weight distribution, a finely honed chassis and xDrive intelligent all-wheel-drive, linked to Dynamic Stability Control, this SUV proudly shows off the handling characteristics for which the Munich maker is renowned.

To further improve dynamics, the car is now lighter and rear bias of BMW's xDrive all-wheel-drive system has been increased. As for engines, well as before, most buyers will choose a diesel, probably the 190bhp 2.0-litre xDrive 20d variant.

There's also a 265bhp straight-six xDrive30d diesel derivative. BMW thinks that petrol power will get more of a take-up this time round, so is offering an entry-level xDrive 20i version, plus there's a range-topping 360bhp X3 M40i variant to take on rivals like Audi's SQ5. As usual with the brand, there's an optional Dynamic Damper Control system, optional Variable sport steering and an optional sports braking set-up.

BMW also boasts that a fording depth of 500 millimetres gives this SUV decent off road ability too. Across the range, 8-speed auto transmission is standard. 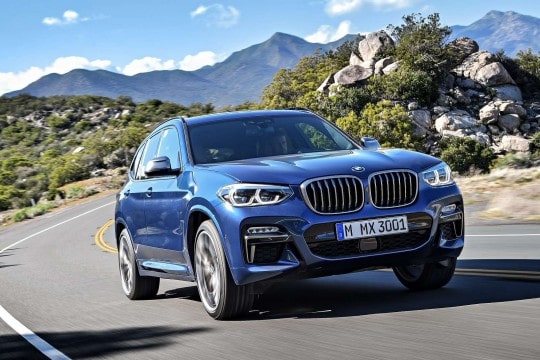 The exterior dimensions of this third generation X3 are largely unchanged, but its five-centimetre-longer wheelbase, long bonnet and short front overhang emphasise its 50:50 weight distribution between front and rear axle. At the front, the chunky three-dimensional kidney grille and LED fog lamps feature a hexagonal design for the first time on a BMW X model. Moving to the rear, the three-dimensional LED light clusters, downward-sloping roof spoiler and twin exhaust pipes further enhance the appearance.The interior of the this X3 follows BMW tradition with a driver-focused and ergonomically designed cockpit.

Hexagonal forms and precise, bevelled edges are a distinct design theme. The material quality and fit and finish are of a class above what you'd expect for a mid-range SAV, as you'd expect from a BMW, while it is also impressively functional, with more cabin stowage compared to its predecessor.To further improve comfort in the rear compartment, the angle of the standard 40:20:40 split/folding rear seat backrests can be adjusted individually and through various stages thanks to the optional rear comfort seat.

This feature also allows the backrests to be released remotely from the load compartment, which expands the standard load capacity of 550-litres to 1,600-litres. 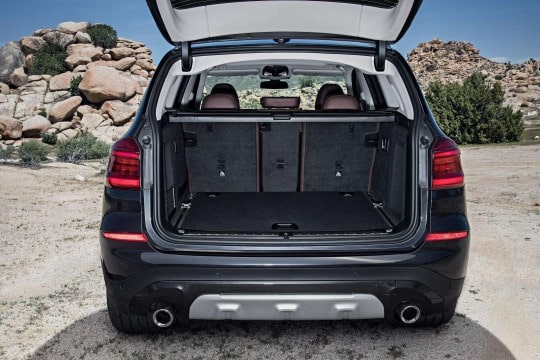 As you'd expect from a current BMW, emissions are low and fuel economy is excellent. To give you an idea of how far we've come, when the MK1 X3 was first launched in the UK in 2004, its 3.0-litre engine made 231bhp and emitted 293g/km of carbon dioxide. The benefit of a decade's engineering is evident in the fact that today's M40i flagship variant develops 360bhp and emits just 188g/km - the combined cycle fuel figure is 34.5mpg. As for the diesel variants, well today's 265bhp xDrive30d model will get 49.6mpg from a gallon of fuel and 149g/km of CO2, which is impressive for a six cylinder diesel SUV. Go for the entry-level X3 sDrive20d and you'll see 56.5mpg and emit 132g/km.

As usual with the brand, there's a 'Driving Experience Control' set-up that lets you switch between drive modes, one of which is 'ECO PRO', a setting that focuses all of the car's systems on achieving ultimate frugality. An overall weight reduction of 55kgs and sleeker aerodynamics also help here, this X3 boasting a class-leading drag coefficient of 0.29Cd. This has been achieved thanks to aerodynamic enhancements including a roof spoiler with aero edges at the sides and an 'Active Air Stream' system, which regulates the flow of cooling air for the engine, brakes and air conditioning. 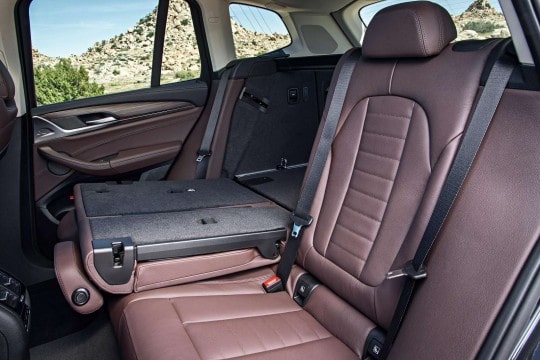 Our strategic consulting team can work with you to see if this BMW X3 is a fit for your Fleet requirements so if you are a Fleet Manager looking for support with your Fleet Operations then LetsTalk on 0330 056 3335 or email us on contact@letstalkfleet.co.uk